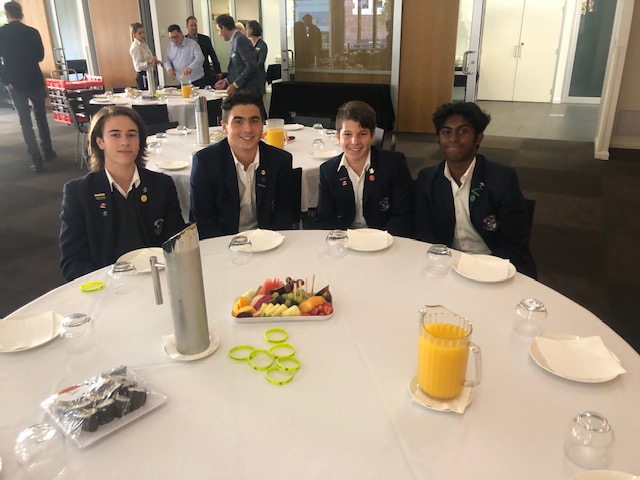 What is Catholic Education?

Catholic Education is based on the example and message of Jesus. It acknowledges, teaches and models that there is no separation between learning and living the Christian life.

Each year Catholic Schools celebrate Catholic Education Week. This year the theme for the week is Growing Young In Christ. This week is an opportunity for Salesian College to celebrate our Catholic Identity and the important role we play in our community. Our school sent representatives to a variety of activities that happened last week.

The Year 7 Class Captains attended the St Patrick’s Mass at the Cathedral, accompanied by Ms Barcellona. Year 10 Senior Leaders attended the Young Speakers’ Colloquium with Ms Tilley, where they listened to three young speakers talk about their values and how their values guide them in using the gifts they have been given by God.

“As part of Catholic Education Week, myself and a few of the other house leaders from Year 10, along with Miss Tilley, went to the Catholic Leadership centre for the Young Speakers’ Colloquium. We heard three amazing stories from three inspiring young people, about topics that mean a lot to them in their own way. Layla from Mount St Joseph Girls’ College spoke about people with Down Syndrome. She has a brother with Down Syndrome and she understands what it takes to look after him and care for him. She knows that all he wants is to be loved, included, listened too and respected for who he is. AFLW player Aisling Utri spoke about following your dreams and never giving up in what you believe in. Especially in the face of adversity. Her dream was to play footy but she couldn’t because there was no female team, however she was also good at hockey so she moved to that. She then received a contract to play for the Bulldogs AFLW team, but she declined it. Then one year later, she received another contract from the same team. It took her a while but she eventually put pen to paper and signed the contract. Now she is a premiership player for the Bulldogs. She followed her dreams and it is incredible to see where she is now, inspiring girls to do the same. Lastly, Sam from St Kevin’s spoke about the issue of domestic violence in our homes and how young people can speak up and make a change on this issue. This speech really opened my eyes to how domestic violence can affect people in today’s society. This hasn’t happened in my family, but I know people who have been affected by this issue. Hearing Sam speak about domestic violence made me realise how big of an issue this really is.”