People from all around the world have been enthralled with the Thai cave rescue mission over the last few weeks. We have collectively held our breath and prayed that the boys would be returned to their families safe and sound. Not only did this story have a wonderful ending, but it drew our attention to what humanity can achieve when we work together.

This week in Religion the students in 8A have investigated all the different parties involved in the rescue mission – from the divers who worked tirelessly to rescue the boys to the farmers who selflessly allowed the water to be diverted to their land. It was clear that Jesus’ message “love thy neighbour” was evident through these heros actions, and we can learn much from them about how to treat one another. The boys have done a wonderful job in creating original works that highlight this message. 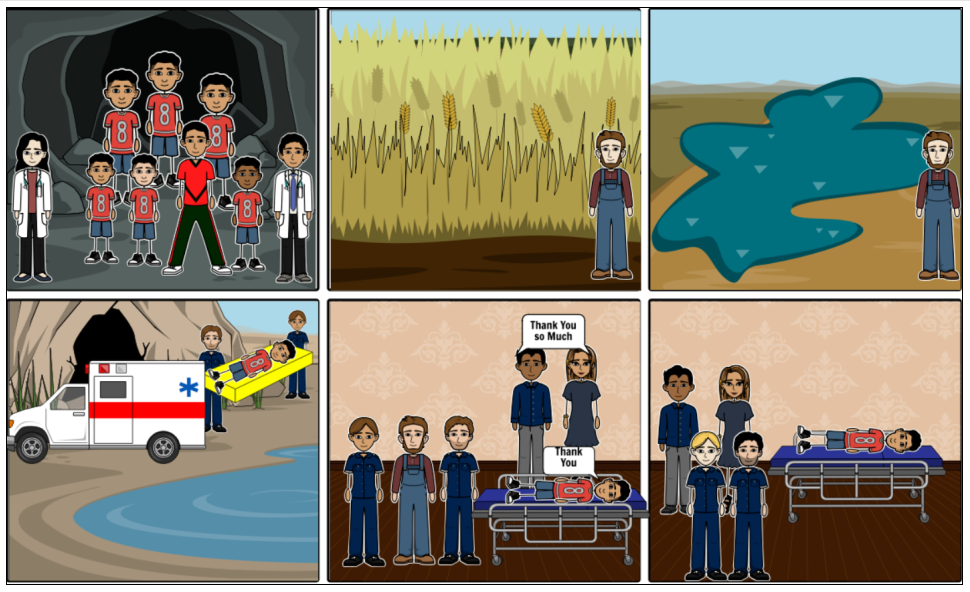 Many people were brought together

These new bonds, they’ll have forever

Together in an unfortunate scene

By themselves or as a team

Perched on rocks, cut off from their life

Faced with danger, faced with strife

Trekking through the muddy caves

Over rocks and dodging waves

Paired with divers, held by a rope

The poor kids were hardly able to cope

True compassion and effort was shown

Everyone loved these boys as if they were their own

A soul lost many a hearts moved

He gave his life to the youth

Praying the world would know the truth

Of the fateful day

When he gave his life away

In an effort to save

The kids on his way to the grave.

Had to fly them all out in aeroplanes,

The selflessness shown by the help given,

Was it 17 whole days they had to wait?

Had to get them out before there were any mistakes

12 kids and their coach with some hope,

Thousands of others holding their breath trying to cope,

It doesn’t matter what you’ve done, who you are or how you’re living,

If you love thy neighbour you will be forgiven,

Saman Kunan gave his life for these boys,

He helped save all of them selflessly may he rest in peace,

Every person here can relate to the parents stress,

Now the boys are back in arms of love and caress.

This was the place. At the foot of the mountain, I met with other navy seals, who were lugging heavy pipes and other equipment.

“Hey, you!” a navy seal official’s voice called behind me.

I peered behind me and my face lit up, “Captain!”

He smiled as we approached each other. I had not seen my former Navy Seals captain in years. I jokingly saluted him, he laughed, but there was no time to talk.

“I won’t be seeing you much during this operation,” the Captain explained, “but after we rescue these boys we can meet at that restaurant you talk about all the time.”

I nodded and went to assist the others with carrying equipment and piping through the rough terrain. It was an incredibly hard job, but it was nothing compared to my old Navy Seal jobs. I would do anything to get them out. I had heard that they were in there for more than a week and were as young as 11.

The cave was in sight. The equipment was placed on the ground. It was time to do my job.

“Sir, here is your diving gear.” A man told to me, handing the equipment and oxygen tanks to me.

My job was an incredibly vital one. I had to deliver oxygen tanks along the route and to the trapped. The oxygen levels in the cave had dropped by 6% so far, so wasting time was not an option.

With the oxygen tanks on hand, I submerged myself into the water. It was like half of my senses had turned off. The visibility through the water was non-existent, I could only hear the roaring of the current, the ice-cold water numbed my limbs and the strong current was grabbing onto me, restraining my journey. The heavy metal canisters did not help.

I had made it to the first aired opening. I laid down an oxygen tank and the diver behind me passed me another one. I looked at my own oxygen canister. I was surprised at how much air I had used, I considered using the one I had to lay. But no, the trapped boys needed the air, I couldn’t use it. They mustn’t be trapped any longer.

I dived into the rough waters, constantly being pushed backwards. I kicked and kicked until I was a good way into the water. The oxygen! I tried taking a deep breath in, but nothing entered my lungs. I turned back, going with the current, but it was too far. I secured the oxygen canister onto the floor.

It’s a strange feeling, dying. Maybe it was the lack of oxygen, but I wasn’t too worried. As long as they escape this cave, I wouldn’t die in vain, even if I didn’t know them. My consciousness slowly slipped away from my grasp. I felt a faint feeling of being pulled, but it soon turned to nothing. A sudden bright, but not blinding light appeared before me. I was approaching it, this otherworldly light.

A man, NOPPARAT KHANTHAVONG, sits in an armchair in his home. His phone begins to ring on the bench behind him. He gets up and starts walking towards the phone. He reaches out to grab it and it stops ringing. He grabs it and looks at it. There are about twenty missed calls from several numbers. He calls the top number and it begins to ring. He puts it up to his ear.

ADUN’S MOTHER picks up her phone frantically. She puts it to her ear.

Yes. Um, I was wondering when my son was getting back from soccer practice.

Yes, I left them with my assistant coach, Ake.

Well, they’re not back yet.

This is Coach Khanthavong speaking. Do you know where the other boys from soccer are?

Yeah. I left after practice, but they said they were going to walk through Tham Luang.

Nopparat hangs up and begins to run.

Nopparat runs to the entrance to the cave. The ground is noticeably wet. Nopparat looks into the cave to see bikes just in the entrance. There is brown murky water everywhere. And no one else in sight.