As we Melburnians and Victorians continue our battle against the deadly Coronavirus, and as the number of deaths continue to rise alarmingly especially among the residents in our aged care facilities, it might be a very good time to turn in prayer to one of our very own, namely Saint Mary of the Cross MacKillop whose feast day was celebrated just recently on 8th August.

As most of us would know, Mary MacKillop was canonised as the first Australian Saint by Pope Benedict 16th in Rome on 17 October 2010. However, some of us may not realise that Mary was actually born in the City of Melbourne on 15 January 1842. In fact, she was born and raised in the inner city and working class suburb of Fitzroy, which was not much more than a stone’s throw away from such well-known suburbs as Collingwood, Carlton and Richmond. 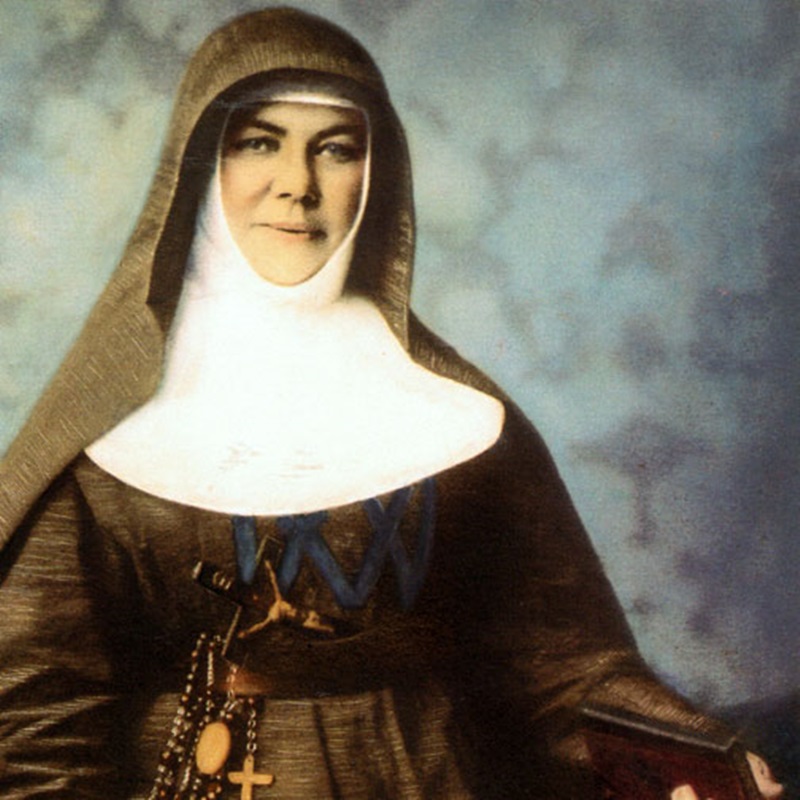 At this point in her story, I will call upon the Sisters of St Joseph or Josephites, the Catholic religious order founded by Mary MacKillop, to take up her story:

‘Mary was the eldest of eight children born to Scottish immigrants. About her early years she writes, “My life as a child was one of sorrow, my home when I had it, was a most unhappy one.”

Much of this sorrow was due to dwindling family fortunes. Her father’s reckless business deals inevitably resulted in relatives supporting the MacKillops. At 16, Mary became the main provider. She worked as a governess, then a shop assistant and finally a school teacher in Portland, Victoria.

In 1866 she met the man who would change her life, Father Julian Tenison Woods. He invited her to teach in a new school in Penola, a small town in south east South Australia.

This was to be a new type of school, a Church school where the education was free to all children. The success of the new school was immediate.

Soon Mary was joined by other dedicated young women and the Sisters of St Joseph was formed, the first Religious Order founded by an Australian.

Dedicated to supplying a free education to all who needed it, small groups of the Sisters spread rapidly through the Australian landscape. They lived amongst the people who needed them, in tents, in shanties and sheds. The more conservative Catholics were unsure of the vigorous new Order, some of the Bishops found it impossible. The freshness of the vision and its practical interpretation were so unsettling to the rigid Church hierarchy that a terrible step was taken … Bishop Sheil of Adelaide declared that Mary was excommunicated and that the Order was disbanded.

It was at this point that friends from all parts of society banded together to support her in her days of crisis. And her friends came from all religions. Emanuel Solomon, a member of the Jewish Faith, gave the Sisters a place to live … Joanna Barr Smith, a prominent Protestant, supported and encouraged them. Defying Church ruling, the Jesuit Fathers offered spiritual succour.

Justice prevailed and the excommunication was ruled invalid. The shattered Order regrouped and the work started again.

This experience taught Mary that official Church approval of the Sisters of St Joseph was vital. She begged her passage to Rome and travelled dressed as a widow. At the Vatican, Pope Pius IX approved and blessed the Constitution of the Order. He also granted the group the right to determine its own direction.

On her return trip Mary was accompanied by several young Irish women who were keen to join her and her Sisters in Australia. Shelters for the elderly, the homeless and the neglected were opened. The new Josephite schools spread through the bush, the small farming communities, the railway camps and mining fields. Soon the Sisters travelled across the Tasman to open schools and missions in New Zealand.

In 1902, while visiting New Zealand, Mary had a stroke. Years of hardship, travel and anxiety had taken their toll on this remarkable woman. She died in the convent in North Sydney on 8 August 1909. Her last resting place is in the Memorial Chapel on the same site.

Mary MacKillop’s life had been totally dedicated to showing God’s love and care for those in need.

Today her spirit is still with us…and for us. And still just as strong.’

There is no doubt in my mind that Mary MacKillop is a woman of whom this nation, this state and this city can be truly proud! In an article entitled ‘Mary MacKillop – The Australian People’s Saint’, it is boldly stated:

‘At a time when women had little power either in Church or in Society as a whole, Mary’s leadership made a huge contribution to the changing status of the poor and disadvantaged in this country.’

And who were the poor and disadvantaged at that time?

* the homeless and street people who had no roof or shelter

* the unemployed without jobs, prospects or a future

* the unmarried mothers who had no hope and no reputation

* the aged, the alcoholics and the addicted who had nobody to look after them

* and so many other poverty-stricken men, women and children besides.

Where governments, churches, hospitals, schools and welfare agencies had continually failed these down-and-out Australians, Mary MacKillop and her heroic Josephites willingly and cheerfully stepped into the breach and set up schools, homes, hospitals, refuges and the like which still exist today and which have become the models for other similar organisations in this country. No wonder Mary MacKillop and her Sisters of St Joseph have become ‘Aussie Legends’ who are now identified with the great Australian virtues of mateship, comradeship, loyalty, compassion, self-sacrifice, humility and generosity – especially in times of crisis and catastrophe!

My dear Salesian friends, I appeal to you all at this most precarious moment in our history to become people like Mary MacKillop who are lights for the world and salt for the earth; who are good, decent, generous and self-sacrificing Australian citizens who work for the betterment of your nation and your fellow human beings; who are prepared to do something positive and heroic in order to make a difference; and who are ready to stand in solidarity with all the victims of the coronavirus pandemic, particularly those who have died and will die as a result of it.

Finally, as Mary herself continually encourages us:

‘NEVER SEE A NEED WITHOUT TRYING TO DO SOMETHING ABOUT IT.’

In St Mary of the Cross,