Faith and Mission Term One Reflection

Term 1 has certainly been a busy term for the Faith and Mission Team. However, it is nothing I would not expect from an area of the school that is foundational to our operations, as delivering education is part of the overall mission of the Catholic Church in Australia. Although the term was frantic at times, we have been blessed with many opportunities for the staff and students to engage in, that reinforce what it means to follow Christ. The following is the Term 1 Assembly Report as prepared and presented by the following members of the Student Faith and Mission Team: 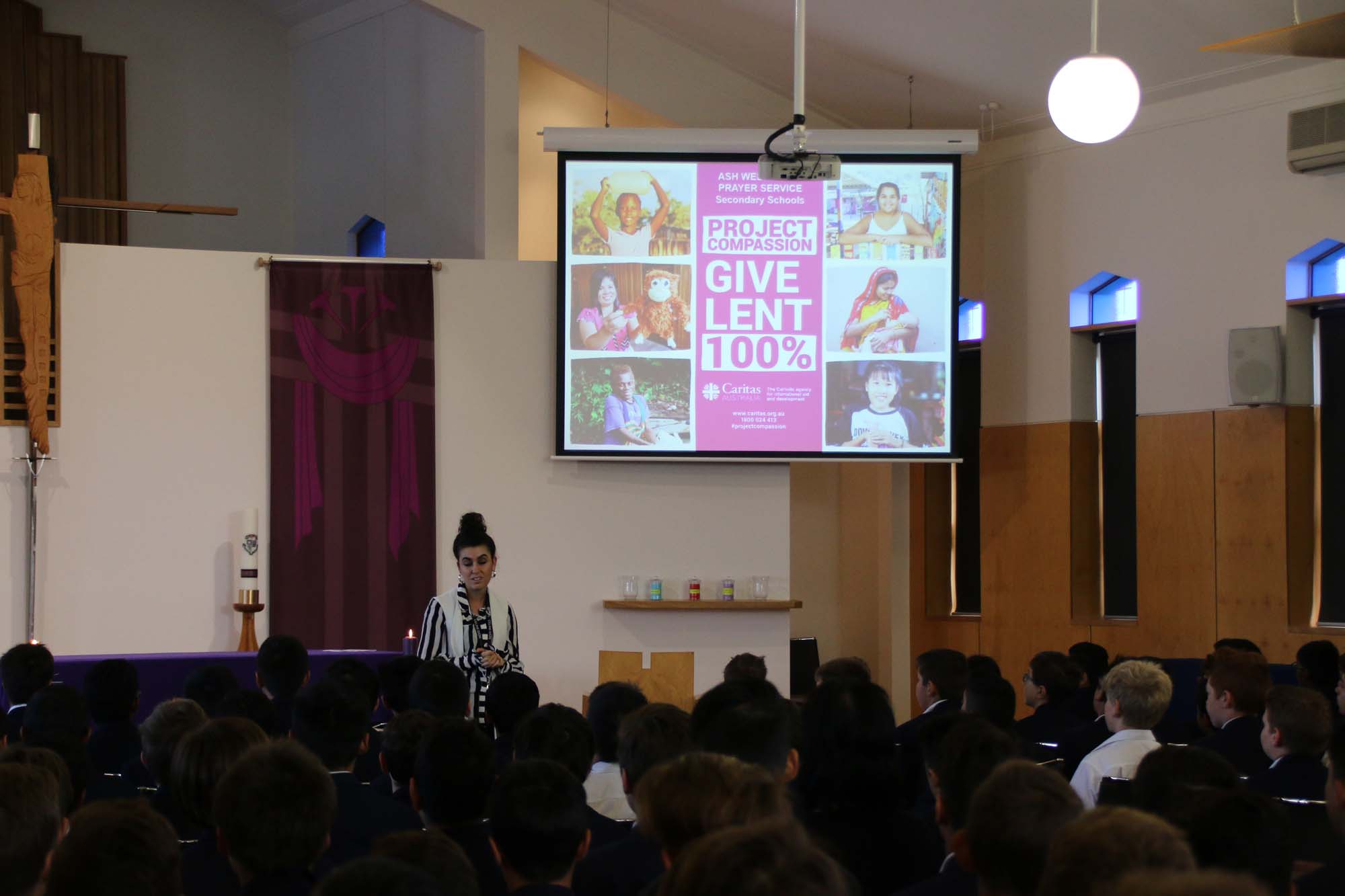 The 2019 school year began as it always does, with a whole school mass celebrating the feast day of our founder St John Bosco. This was an important part of the start of the year, where we give thanks for our holidays and focus on some key things for the year; including being holy.  This year in particular, the idea of ‘holiness is for everyone’ is the theme of our Strenna (our motto for the year). During our learning about this, we discovered that doing the ordinary things extraordinarily well is exactly what Gods asks of us. Throughout the Mass, Father Greg spoke of love, kindness, happiness and making sure we all do our very best.

In Week 6, we all gathered in our Oratories for Ash Wednesday services, except for the Year 7’s who gathered in the Chapel. Here we recalled the ideas of praying, giving and fasting as a way of preparing for Easter Sunday and the Resurrection of Jesus. We received the ashes to remind us that God is gracious and merciful to those who call on Him with repentant hearts.

With Easter Sunday occurring at the end of the Term 1 school holidays all students were given an opportunity in Weeks 8, 9 and 10 to receive the Sacrament of Reconciliation. We all gathered in the Chapel with our respective year levels for a short reconciliation service, providing us with a time to reflect on our words, actions and the way we respond to others.

Next term we look forward to our year level Resurrection Masses, celebrating the Feast day of Mary Help of Christians (which is also a Salesian Feast Day) and our very unique and special Salesian Festival Day Mass.

Don’t forget that every Friday morning of the school term we celebrate Mass in the Chapel, starting at 8:05am and finishing by 8:30am. All staff and students are very welcome to attend.

On behalf of the Faith and Mission Team, I wish you all a happy and holy Easter. 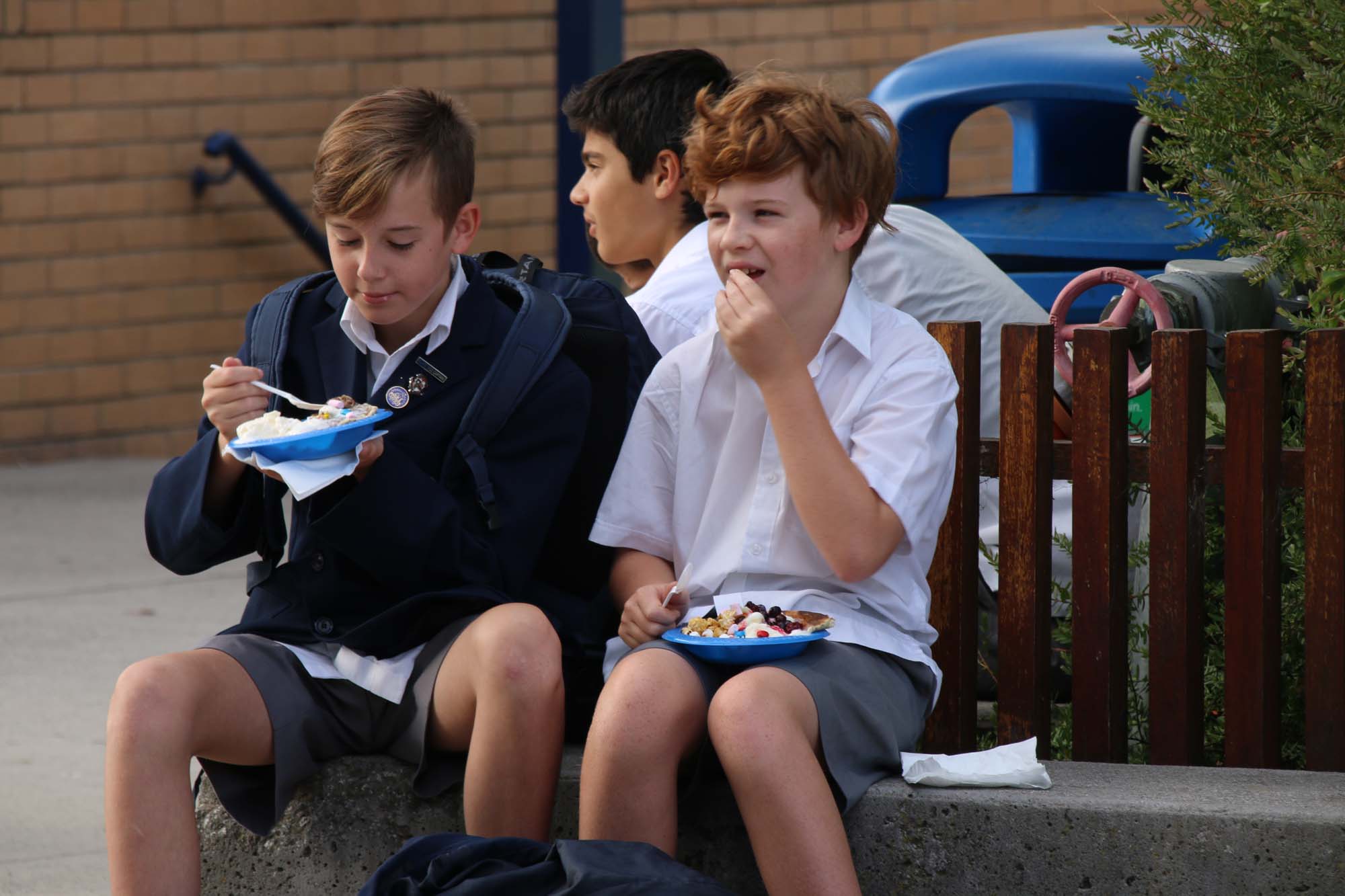 Our Term 1 awareness and fundraising focus was Caritas’ Project Compassion. Caritas Australia is the international aid and development organization of the Catholic Church in Australia. It brings thousands of Australians together in solidarity with the world’s poor to help end poverty, promote justice and uphold dignity.

The theme for Project Compassion 2019 is GIVE LENT 100%, with the focus being to empower young people to lead their communities to a better, just future, and standing in solidarity with young people living in poverty by giving alms to create real change. From the following report, you will see that Salesian College certainly did GIVE LENT 100%!

This term you have demonstrated your faith, love and generosity in a number of ways.

The Annual House Athletics ran house canteens as well as a noodle and cookie stand, which raised $1,381.80

The Shrove Tuesday Pancake Fundraiser raised $1,119.20 with Moroney earning the most points by raising the highest total of $318.50.

Our College Captain Bo De Silva, with the assistance of Nick Angeloudas, organised a Staff vs Student Basketball Game, which raised $83.20 from those paying for the privilege to watch the game.

Ms Cafasso also took it upon herself to put her Italian cooking skills to the test and made and sold jars of tomato puree, raising $150 for Caritas. Thank you Ms Cafasso!

The Faith and Mission team also embarked on selling tickets for the Fair Trade Easter Raffle. Fair Trade is about stable prices, decent working conditions and the empowerment of farmers and workers around the world. Buying Fair Trade chocolate makes a huge difference to the lives of cocoa farmers and their families around the world. The Fair Trade Easter raffle which will be drawn shortly helped us raise awareness and money to ensure Caritas can support cocoa farming, so farmers can provide a better future for themselves and their families. The Easter Raffle raised $737.10

Each year level raised money through general collection, which was inspired by the work covered in our RE classes on Caritas’ work in communities around the world.

Year 9 raised a total of $616.95 with 9G raising the most, collecting $212.80. Yr 9s also organised an activity where they threw water balloons at their teachers, paying 50 cents per balloon for the privilege!

Our total for fundraising for Caritas this year has exceeded all expectations.

In addition to Caritas, we had two other awareness and fundraising efforts this term, both masterminded by the Year 9 staff and students. Our first was the Bake Sale held last week. The Year 9 students, as part of their Religious Education Assessment, organized the bake sale, made posters, baked goods, developed ingredient lists, decided on selling prices and then sold the goods over two lunchtimes. Their efforts raised $717.85. This money will go to supporting refugee families.  Thank you and congratulations to the students at Year 9 for their great efforts.

The Year 9 students made and sold choc chips muffins last week for St Vinnies Soup Vans, which was a part of their learning during their Community Service Expo. They raised $214.75. They also learnt about CPR, the life of refugees, homelessness, how to knit a blanket for the homeless and how to engage with the senior citizens of our local community. We look forward to hearing more about the Year 9 Community Service program next term.

Thank you to everyone for their support of our awareness and fundraising campaign for Caritas in Term One. I very much look forward to an even greater effort in Term 2, when we will be raising money for our brothers and sisters in Salesian schools in Cambodia!

Our Oratory Program is deeply embedded in the Salesian charism and teachings of Don Bosco. Don Bosco set up his first Oratory in Turin to provide young boys in trouble with family support and someone to look after them. On the occasions in which they gathered, they prayed, had religious instruction, and were given clothing and food. They played games, met new friends and had fun.

Later Don Bosco decided that his Oratory needed to not only deal with the immediate needs of the boys but to better prepare the boys for a life that could be well lived. He therefore introduced into his Oratory a school, to provide the boys with skills that would enable them to find work and look after themselves and their future families.

The Oratory was all these things and always based on his preventative system of reason, religion and loving kindness.

Today the idea of Don Bosco’s Oratory continues in our very own Oratory Program.

Although there have been many different Oratory activities happening across all year levels, one of the highlights was the Year 7 and 11 Mentoring Program. At the start of the year, Year 11 students were buddied up with a Year 7 buddy. We welcomed them to the school and their House, toured the school and showed them all the different places they can hang out. We introduced them to teachers we met along the way, telling them which ones were nice and which ones were even nicer! The most popular place for Year 7’s was the canteen! They asked lots of questions about the Chapel too.

This morning we embarked on the second mentoring activity. This time it was about having some fun while we played games in our Houses. Year 7 and 11 students joined forces in their houses to play a variety of games including soccer, and an egg and spoon race. It was a lot of fun enjoyed by both the Year 7 and 11 students. Out next mentoring session will be having year 11 students mentor Year 7 students regarding test and exam preparation. A special thank you to Ms Romano, Mr Beurs and the heads of house for organising these sessions. 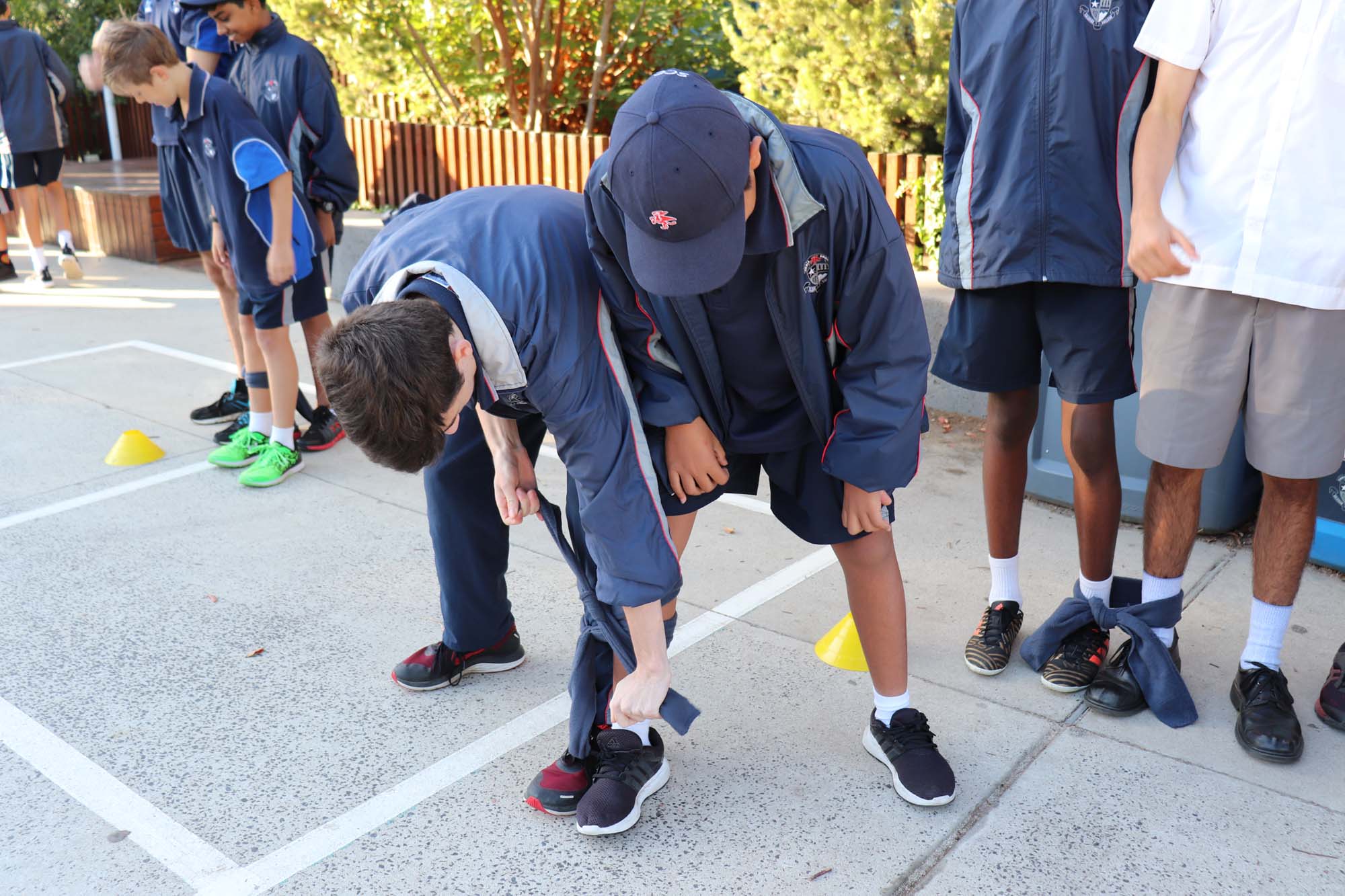 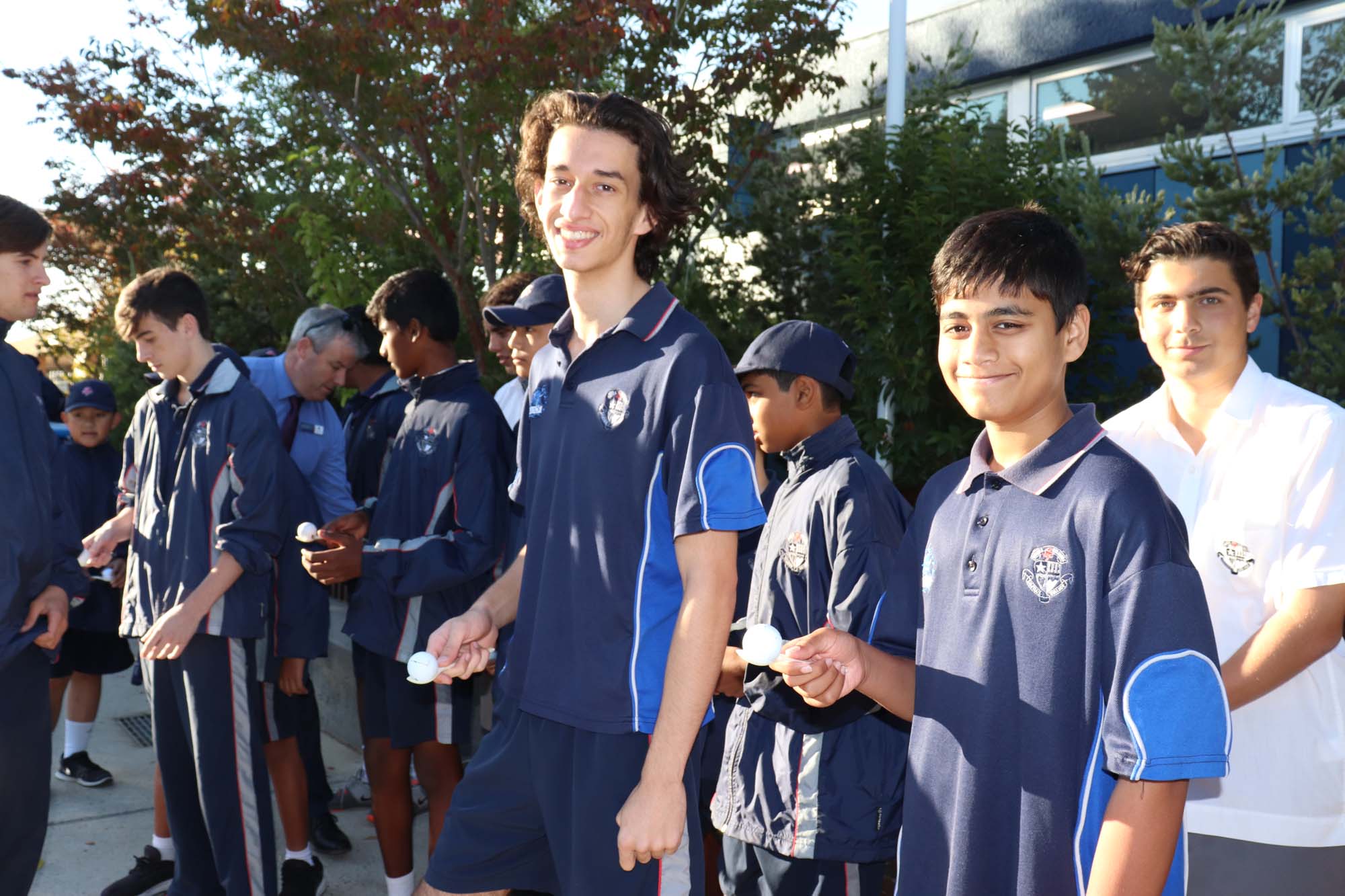 The Reflection Days at Salesian College are a long standing tradition. Each Year 11 has the opportunity to attend one each year, focussing on a theme which is related to the learning and development of the respective year level. In Term 1 the Year 11’s attended their Reflection Day activity.

The day took place at Amberly, Lower Plenty and was facilitated by Steve Lawrence. Steve was an AFL premiership player for Hawthorn, was the Director of World Youth Day 2008 in Australia, and a father of six. Coupled with his  experiences as a Director of an international school of mission in Rome, his teaching and travels and his adolescent experience in a broken family, he was able to openly and honestly communicate with the boys on a number of key issues.

The aim of the day was to encourage students to set goals for themselves as people who have the capacity to be men of character for others, primarily through their actions in the small things.

The three topics covered were:

Underpinning these topics is a focus on Jesus, not only as a model but as the source of life and the one who helps us build communities and go out to others on our mission.

The boys were taken by Steve’s stories and on many levels were able to relate to them and use them as a point of reflection about the type of men they want to be.